It feels like this whole year has been one of mourning.  It started with Natalie Cole and I’m hoping it has ended with Debbie Reynolds, and in between we lost our country to a man who has no idea what the hell he is doing and couldn’t care less about non-white and/or poor people.

In a year full of notable losses, there are a few that are very important to me.

I am one who loves Michael Jackson and Prince on the same level.  I was late to the Prince fandom.  Of course I loved many of the songs on “Purple Rain”, but it wasn’t until “Diamonds and Pearls” that I could truly appreciate his artistry.  I’ve been to as many MJ shows as I have Prince concerts.  But when MJ died, I was shocked but somehow not surprised.  When the news of Prince’s passing hit, I felt like I had been punched in the gut.  I never thought that I would truly mourn the passing of a celebrity, but I found myself inexplicably saddened by the loss.  He isn’t as much a part of the soundtrack of my life like MJ, but for some reason this was much more of a loss.  This wasn’t expected.  For God’s sake, he was vegan!  This wasn’t supposed to happen!  As I listened to damn near his whole discography the night after he died, I realized how much I related to him and just how much I depended on his music to get me through some rough times.  He was more a part of my world that I realized and the idea that he is gone still makes me sad.

Carrie Fisher as Princess Leia. (Photo from Legion of Leia)

Princess Leia was the first badass woman I ever saw on screen. ( I would be introduced to Pam Grier and all of her badass characters much later in life.)  She stood up to Darth Vader and took control of her botched rescue.  She carried a gun and wasn’t afraid to use it.  Most importantly, she didn’t fall starry-eyed and helplessly in love with the “stuck-up, half-witted, scruffy looking, nerf herder”.  She made him earn it.

During my childhood and most of my adult life, she was the only woman in my favorite sci-fi universe.

Carrie Fisher wasn’t afraid to speak her truth and she truly didn’t give a fuck if you liked her or not.  I will miss her unabashed honesty.

The Obamas and Bidens 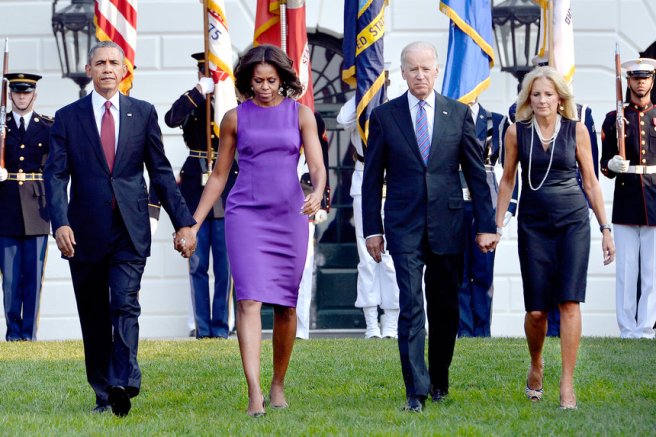 Thank you LordBabyJesus, the Obamas and Bidens are still with us, but we are losing them as daily reminders of all that is good and possible.  I will miss the glimpses into Barack and Michelle’s love affair.  For that matter, I’ll also miss the glimpses into Barack and Joe’s bromance.  These four people corrected the course of our trajectory.  Now we’re faced with an idiot who will send us into a downward spiral, 140 characters at a time.

Damn you, 2016.  You’ve taken so many things that you had no right to take, and given us at least one thing that the majority of us couldn’t even imagine.   I’m gonna need you to sit your ass down for the next 12 hours and go out silently.  And while you’re at it, Ima need you and your cousin 2017 to keep your hands off of Betty White, Pam Grier, Diana Ross, Tina Turner, and Stevie Wonder.  Thank  you very much!

While I am still existing in cloud of pissedivity because of all the losses we experienced this year, I am very hopeful that 2017 will bring us much light.  I hope that Prince’s family will release new music from The Vault.  I hope that the Star Wars universe continues to give us badass women.  I hope Democrats find a way to protect Obamacare and block the nomination of horrible judges.  I hope Barack and Michelle shine even brighter out of the White House than they did while they were there.  And as always, I’m hopeful that this will be the year that I will find someone that looks at me the way he looks at Michelle.

This post was in response to today’s blog prompt “Hopeful“.

Lost in the Snow

Matilda’s Take on the 3 a.m. Chicken

Pirate Squinty Eye is Back