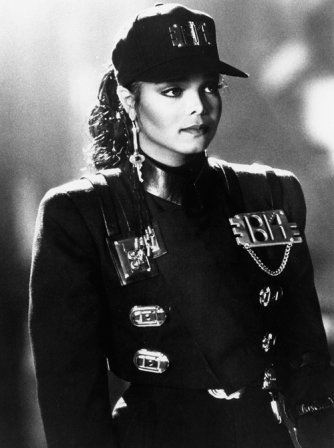 I was in high school when “Rhythm Nation” dropped.  I was already a huge fan, but this album took me to a-whole-nother level.  I was already an avid concert-goer for both Mike and Janet, but this album made me a bit fanatic.  I had the hat, the 1814 pin, the t-shirt, you name it, I had it.  I would have rocked it ’til my tape popped, but I’m pretty sure I had this album on cd.  The album was everything; socially conscious, great melodies, grooves that made you wanna dance, choreography that you had to know in order to be cool, and the videos!  Mike invented the long form video and Janet put her spin on it.  The long video that goes with this album was the bomb.  I’m sure I still have it on a vhs tape somewhere.  I remember thinking that it was so cool to have one video for three songs (“Rhythm Nation”, “I Miss You Much”, and “The Knowledge”).  Mike never did that and to my knowledge, no one has done it since her until Beyonce’s “Lemonade”.

A group of us decided to perform “Black Cat” for a high school pep rally.  We had our own choreography and everything.  You couldn’t tell us that we weren’t good enough to go on tour with Ms Jackson.  We. Were. Fierce. (Thankfully, this was before the age of smartphones and YouTube, so there is nothing out there to prove otherwise.)

Today is Janet Jackson’s birthday.  To celebrate her day, please take a trip with me down memory lane and enjoy her most meaningful and iconic work, “Rhythm Nation”.

And if you’re looking for tickets for her “The State of the World” tour“, you better act fast!

Lost in the Snow

Matilda’s Take on the 3 a.m. Chicken